In her weekend article in the Sydney Morning Herald, “Australian workplaces succumb to the iPad”, Cynthia Karena covers a number of companies who have adopted tablets.

Interestingly the article demonstrates that much of the push for consumer tablets comes from the simple communication needs of executives and board members. For that, consumer tablets like the iPad can do just fine – security policies permitting.

But for ADT security who wanted to deploy tablets for 80 field technicians, the iPad was never going to cut it. Mark Norton, managing director for ADT in Australia is quoted:

"iPads don’t have the power we need. We’re interfacing with disparate systems."

"Customers sign the tablet and the document is instantly loaded into our enterprise system and emailed to the customer," says Norton.

ADT deployed the Motion Computing J3500 – a rugged Windows 7 tablet designed specifically for field work. It also has an active digitizer pen interface the allows the technicians to input information in their handwriting and also allows customers to sign on the screen. 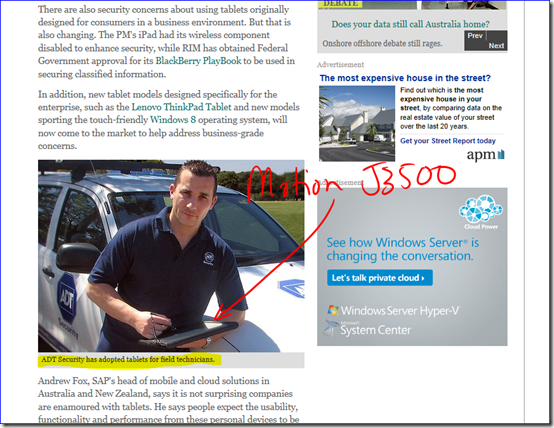 There are many considerations that businesses take into account including:

Thousands of companies in Australia have already deployed tablets to improve their workflow and eliminate double handling. It is good to see an article in the mainstream media presenting the less sexy side of the tablet world with some balance.