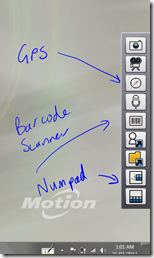 If you own the Motion Computing CL900 you’ll want to try out this new beta version of Quicknav. Quicknav – aka Dialkeys – is a piece of software that has long been featured on the Motion J3500 series.

Quicknav is a sidebar shortcut application that allows quick and convenient access to things like the integrated camera, video and voice recording functions via a touch friendly interface.

On the CL900 it can comfortably replace the ExTouch software that ships with the device for a couple of reasons:

Dialkeys has actually been around for many years now. I first encountered it on the Samsung Q1 UMPC device about 5 years ago. It has come along way, but some features like 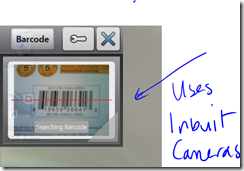 the alternative onscreen keyboard still work great with a touch screen device like the CL900.

Quicknav offers users the ability to capture barcodes using the devices inbuilt front and back cameras. This feature should not to be confused with the CL900s upcoming inbuilt barcode scanner option. 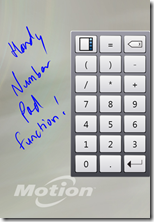 On the input front, the on screen Number Pad function is fantastic for entering data in places like Excel spread sheets. You’ll find that the number keys are big and easier to use with touch. The keypad seems to be fixed to the right hand side – sorry Leftys!

As mentioned above, the camera functionality of the Quicknav software allows you to easily access the full 3 megapixels of the inbuilt front and back webcams.

You can now also geo-tag photos taken with the inbuilt camera. Geo-tagging takes GPS coordinates from the inbuilt GPS on the CL900 and adds them to the properties of the photo. A time stamp can also be added as well as an arbitrary text stamp.

It’s currently in Beta, so don’t be surprised if you find a bug here or there!