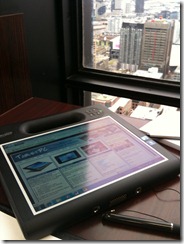 A customer in the building industry told me that they surveyed similar companies around Australia to see what tablets they used. Out of the companies that used iPads on average they replaced two a year through on site damage.

But which rugged tablet PCs come with Windows 8?

Well the answer right now is unfortunately none.

That is because they do not meet the criteria required to get the tick of approval for shipping with Windows 8. There are three main reasons for that.

The 1366×768 resolution requirement is not a bad thing, but the current rugged tablets do not meet it.

Since rugged tablets are not built on the throw away development cycles of consumer tablets, it is unlikely that any of the established players will have been able to shoehorn a new screen into their rugged tablet quickly.

Glass to the edge

This design rule is supposedly in place to make the tablets all look sexy. Unfortunately the effect is that they all look the same.

Worse than that, glass-to-the-edge design (driven by Apple’s form over function philosophy) is just a bad idea for durability in general let alone ruggedness.

Any time a glass-to-the-edge tablet is dropped or knocked, the shock is transferred straight to the edge of the glass and that usually results in a broken screen. 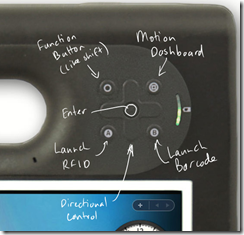 The last requirement for Windows 8 is for a simplified button layout.

Windows 8 tablets must have a home button front and centre in the bezel under the screen. They also require a rotation lock button and a volume control rocker, but that’s it.

Tablets can’t have button panels like this one found on the Motion F5t. Once again, this is an aesthetic decision and functionality suffers as a result.

The front button panel is one of the key reasons that I use the F5t as opposed to one of the less rugged slates at my disposal.

Button panels offer a massive productivity boost on tablets since they give fast access to repetitive functions. They are one of the features that make rugged tablets fit for purpose, so again we hope to see some leeway here in future.

The Microsoft Windows 8 tablet specifications document does mention exemptions for rugged tablets. So despite the major shift of focus from business to the consumer in Windows 8, we know that somewhere in the depths of the giant software company someone is thinking about the still largely unexplored market that is rugged tablet computing.

It seems to me that nearly every consumer in the Western world has an iPad or an Android tablet or three gathering dust in their desk drawer now. Windows 8 is going to have a hard time selling into that wasteland!

On the other hand, Windows rugged tablets offer immediate gains for businesses who collect data with pen and paper while mobile and retype it back in the office. Look around and you’ll find see this rework happening everywhere.

It will be interesting to see which if any rugged tablet manufacturers come up with a Windows 8 slate tablet next year (and I’m not counting the Panasonic Toughbook C2 since it should barely be called tough at all).