How does the Wacom Tablet PC Pen Work?

When a Tablet PC has the Wacom Active Digitizer built in you get a highly accurate, fast proximity and pressure sensitive smart pen that is perfect for note taking, handwriting recognition, mark-up and digital art.

Here’s what’s inside it: 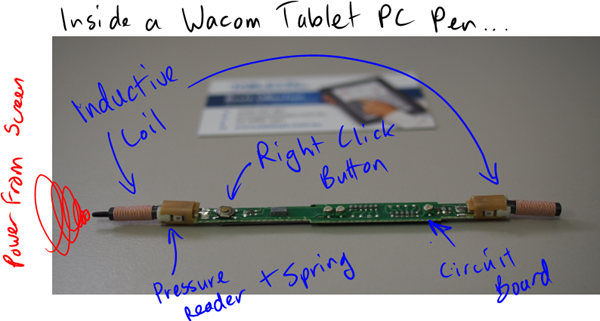 As you can see once the outer plastic is removed there is a copper coil, a pressure sensor, a button and a circuit board.

Since this Motion Computing Wacom Pen has an eraser end, this pen also has the copper coil and pressure senor on both ends.

As explained in Wikipedia (quoted below) Wacom Pens don’t need a battery. Instead, they use induction – power is sent from the screen and the pen picks it up and turns on when it is in range.

Wacom tablets use a (expired) patented electromagnetic resonance technology.[33] Since the tablet provides power to the pen through resonant inductive coupling, no battery or cord is required for the pointing device. As a result, there are no batteries inside the pen (or the accompanying puck), which makes them slimmer.

Under the tablet’s surface (or LCD in the case of the Cintiq) is a printed circuit board with a grid of multiple send/receive coils and a magnetic reflector attached behind the grid array. In send mode, the tablet generates a close-coupled electromagnetic field (also known as a B-field) at a frequency of 531 kHz. This close-coupled field stimulates oscillation in the pen’s coil/capacitor (LC) circuit when brought into range of the B-field. Any excess resonant electromagnetic energy is reflected back to the tablet. In receive mode, the energy of the resonant circuit’s oscillations in the pen is detected by the tablet’s grid. This information is analyzed by the computer to determine the pen’s position, by interpolation and Fourier analysis of the signal intensity. In addition, the pen communicates information such as pen tip pressure, side-switch status, tip vs. eraser orientation, and the ID number of the tool (to differentiate between different pens. mice, etc.). For example, applying more or less pressure to the tip of the pen changes the value of the pen’s timing circuit capacitor. This signal change can be communicated in an analog or digital method. An analog implementation would modulate the phase angle of the resonant frequency, and a digital method is communicated to a modulator which distributes the information digitally to the tablet. The tablet forwards this and other relevant tool information in packets, up to 200 times per second, to the computer.

Unfortunately these pens generally aren’t serviceable and this one is certainly, to quote Taylor Swift, “never, ever, ever getting back together!” (I’m a Dad, so it’s ok for me to write that!)