As Tablet PC resellers, we have helped many, many Mac users switch to the PC platform. The best kept technology secrets (Windows 7 Tablet PC with OneNote) once discovered are so compelling that even the best of Apple’s marketing machine can’t compete.

The ability to take handwritten searchable notes on a powerful PC platform – once discovered – outguns the slickest, shiniest gadgets that the market has to offer.

Don’t believe me? Then read this from a Tablet PC teacher who wrote in to John Guin’s OneNote blog: 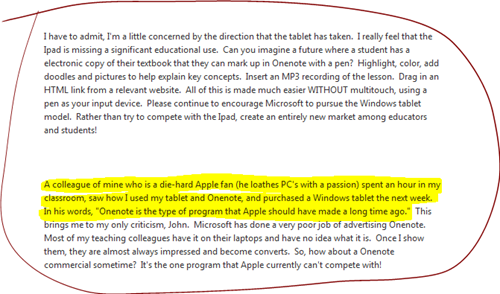 This is reminiscent of many of our experiences in switching Mac users to the Tablet PC.

I hope folks high up in Microsoft and their hardware partners take note of comments like this. Many companies like HP, seem to have swallowed the rhetoric on multi-touch and have become blinded to the untouched market for real productivity Tablet PCs (Perhaps why the are jagging around with the HP slate 500).

Fortunately, some companies are alert to the power of Tablet PCs with touch AND pen (Running OneNote!) and you’ll see a number of new tablets emerging shortly into a new age of accessible Tablet PCs for the mass market!

Cheek out the OneNote Facebook page to see how many Mac uses are begging for a Mac, iPhone and iPad version… it’ll never happen of course. Ok, so onenote for iPhone is out now in the US only which will be a big bonus for the masses of PC based iPhone users, but still no sign of Mac and iPad versions…