The Fujitsu Stylistic Q702 Tablet PC is now available to order from the Tablet PC Store!

We recently took another look at a prototype of the upcoming Fujitsu Q702 and were intrigued to find a new N-Trig Active Digitizer Pen attached!

Here’s a picture of the new N-Trig G4 DuoSense Pen from the Fujitsu Stylistic Q702: 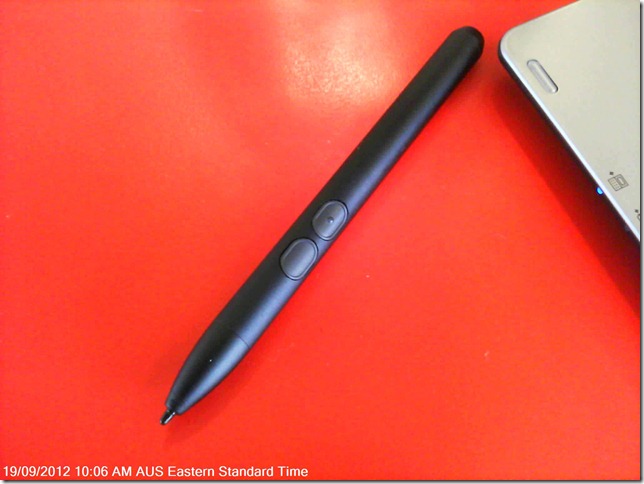 This new pen is a major breakthrough for the Q702 and N-Trig tablets everywhere!

Long term pen tablet users like us have used the Wacom Active Digitizer Pen and going to the previous N-Trig pens was generally a poor experience.

Here’s what N-Trig have changed on the new G4 pen:

When you put those refinements together with the high performance “Ivy Bridge” Intel Core i5 processor that is in the Q702 you have a pen experience that is on par with the Wacom Active Digitizer Pen. Wacom has been the gold standard on Microsoft Windows pen tablets for over 10 years.

The Q702’s N-Trig G4 Pen is still powered by a AAAA battery which will last a few months of use. But the upside of Fujitsu’s selection of N-Trig is that the technology is usually much better calibrated that the Wacom equivalent.