x64 app support arrived for the insiders version of Windows 10 on ARM. Finally 64bit apps that were written for Intel and AMD processors can run on the Surface Pro X!

This pre-release marks a major milestone for ARM based Windows 10 devices like the Surface Pro X. For the last 3 years Windows 10 on ARM has only supported 32 bit x86 apps, and not x64 apps. You could run 64bit apps that were written natively for the ARM processor, but not if they were written for AMD or Intel processors.

For me the lack of x64 app support has not been a deal breaker, you can still run a large majority of apps on ARM. But, there are a few x64 apps that I was missing on the Pro X.

The lack of these apps was often an annoyance for me. I’d need to switch over to the Surface Pro 7 or the Surface Go 2 to slice a 3D print, or to edit some photos, on a weekly basis.

However, now with x64 emulation for windows insiders, lets see how these programs run on my Surface Pro X

One of those my grievances was solved by Adobe themselves. They released a native ARM version of Lightroom for Windows! Seemingly without fanfare.

Now this is the new Lightroom app, not the Lightroom classic app. And while I do prefer the classic app, this is still a powerful, native photo editing app on my Surface Pro X. It runs nice and fast, and it’s great to use with touch and pen.

So before this X64 support even arrived one of my personal bugbears had already been removed! Adobe has also released Photoshop as a beta version for Windows 10 on ARM.

Camtasia is not a program that I really need, Snaggit is just fine for what I do… In fact the inbuilt PowerPoint screen recorder is probably even better. But, since I couldn’t previously run it, being an x64 app, I needed to try it.

It installed just fine, but as soon as I went to run it, it threw a couple of weird error messages, and asked for admin privileges. So I reran the program with admin privileges and it loaded up. However, the key reason that I would use Camtasia is to record the screen, and that actually runs in as a separate program called the Camtasia Screen Recorder.

Now again, that program would run just fine and it was able to be launched from within the Camtasia window, but unfortunately, I can’t get it to record. The program crashes when I attempt to hit the record button. So that’s a bit useless at the moment. I’m going to say this a few times, but we tested this in like the first week of this beta feature. This is not public release, nor is it something that you would want to run on your main computer. Yet. It’s very early days and it’s a bit buggy. It’s not all bad, but Camtasia was a fail.

Revu is a pretty advanced PDF application for architects, engineers, and construction workers. It’s a pretty amazing app and it’s actually been running quite well on the Surface Pro X as an x86 32bit app. But I thought that I’d try it out and see if it was any better as a 64 bit app. The 64 bit version of Revu 20 installed just fine. So, I ran it, and it crashed. I ran it again, and it sort of loaded a PDF… But not quite. The 32 bit version works just fine, but for some reason I couldn’t get the 64 bit version going so that I could compare it.

Again, this is very early days and this is absolutely beta software. So a problem like this is not unexpected. Support for x64 apps is scheduled to release to the general public early this year, and there’ll be lots of bugs to iron out before it gets there. But, my Revu 20 test was a bust so far. No biggie, it still works well in 32bit.

Next up the GoPro Webcam app. Now this is beta app itself, so running beta software on beta software doesn’t seem like a great idea, does it? The GoPro webcam app turns a GoPro Hero 8 or 9 into a webcam for your PC. It works great on the Pro 7, but the software is x64 so, I couldn’t run it on the Pro X. And it turns out that I still can’t run it for some reason. The install fails on the way through… Again, early days. Weird edge cases… I’ll give it some time.

All I had left was Ultimaker Cura. Now I have a Creality Ender 3 that I bought it in April. It represents my second go at 3D printing. And for some reason, this printer has really clicked with me. I’ve been running it almost nonstop for the last seven months. Here in Melbourne we spent most of the last nine months in a hard lock down, and 3D printing was one of the things that kept me sane during that mentally tough time.

Cura slices up 3d models ready for printing, and for better or worse Cura is written on a framework called Uranium. It makes it easier to write apps that can be ported across Windows, Mac and Linux.

Generally if these apps are written well it’s a pretty good thing. For example, the electron framework that sits underneath Microsoft Teams, Slack, Visual Studio Code and Discord has now been ported to be run natively on ARM. And because of that apps like Teams now run fast and fluid on the Surface Pro X, even though they are running on top of this multi platform framework.

However if your app is emulating from one processor type to another it’s not such a great idea, as the framework itself is another abstraction. So if your app needs translation or emulation, then it has to do double duty. So framework apps usually don’t emulate well. And that’s basically the case with Cura.

During the install process for Cura I ran into an Open GL error. But fortunately I found that there is an Open GL compatibility pack that could be downloaded from the Microsoft Store. That fixed the problem, and Cura was ready to run.

Cura is not the fastest app to load at the best of times. And compared to the Pro 7 it was even slower to load. It’s is not quite as fluid to move around in as it is on the Surface Pro 7, and it takes longer to slice. But it is still very usable, and it will be used well on my Pro X.

So for me that was one or two wins out of five for the new support for x64 apps. This testing was done week one of the public beta, so I’ll be interested to see this feature progress. Now that Apple are also on board with ARM processors on the desktop, we’ll see more apps arrive natively for Windows 10 on ARM. We’ve already seen some and we expect to see plenty more. 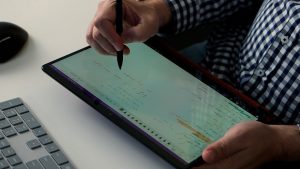 Now that we’re all on Zoom or Teams for our meetings, how do you write notes with the Surface Pen when you need to use the inbuilt webcam for your call? Because in order to take effective notes on Surface, you need to have the device flat, hand resting on the screen – and that END_OF_DOCUMENT_TOKEN_TO_BE_REPLACED 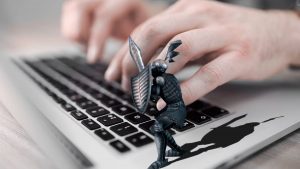 Attracting a New Crowd The battle of the best, fastest, most magical ARM processor is well under way. So my recent videos on the Surface Pro X are drawing a bit of a different crowd. It turns out that there is a thing called a “Keyboard Warrior”? And they’re like Murder Hornets. And they’re swarming! END_OF_DOCUMENT_TOKEN_TO_BE_REPLACED

Specifications, Schedules, and Plans are very important documents. But what is also important is our ability to share these with others. We don’t build in isolation. Building requires a range of people to work together on the process. The customer, specialists, certifiers, and our construction team all need access to up to date versions of these END_OF_DOCUMENT_TOKEN_TO_BE_REPLACED 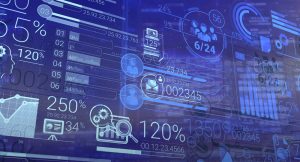